To every visitor of the Martiricos High School and its students, the Museum of Natural Sciences is, without a doubt, the Crown Jewel of our patrimony. In practice, it was the first museum of history in town and now there’s an exhibition of an attractive collection of animal species in a recently habilitated space. This collection grew during the mid-19th century as a part of what was called the “Natural History Office” due to the fact that professors were commended to add the species of the city to it. Martiricos had its own taxidermist for years until the late 19th century when the job was removed. Since then, the collection has been preserved by some teachers, in particular by professor Antonio Acosta and ornithologist Manuel Garrido Sánchez, who has published several books about its history and content. We still preserve an 1882 catalogue of the collection written by professor Cesáreo Martínez Aguirre, which was later completed by professor and headmaster Luis Muñoz-Cobo Arredondo in the years before the Second Spanish Republic.

In Garridos’ words, it’s a unique museum not only for its collection, but also for the impossibility of creating new museums of Natural Sciences following the legislation on protected species in force. The fact that the museum includes endangered animals confirms its exceptionality. The collection is mostly formed by birds, but some mammals, one alligator among the reptiles and some exotic fishes are the “stars” of this marvellous zoological collection. Another one of the stars of the collection is the articulated skeleton that seems to confirm the legend of the janitor who wanted to donate his body to the Natural History Office. We’ll return to the other stars of the collection later on. 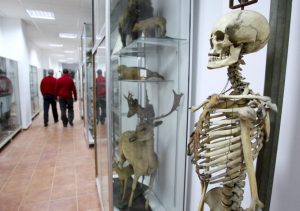