Telegram from a Nobel Prize Winner

On the 23th October 1959, the high school’s headmaster received a telegram from Forest Hills a neighbourhood in Queens, New York. This document is part of the high school’s history. It was Severo Ochoa’s response to the telegram the faculty sent him in order to congratulate him for winning the Nobel Prize in Medicine. This Spanish scientist studied Bachillerato —execept for the fifth school year— in Málaga and, during his lifetime, he gave heartfelt testimonies of what his years of education in our city meant to him. He always highlighted the influence some of the high school’s teachers had in his science career: in particular, Luis Muñoz-Cobo, natural history teacher, and specially, as it’s noted in the telegram, Eduardo García Rodeja who, according to his words, “awoke my passion for natural sciences”. In 1993, a few months before his death, Severo Ochoa wrote in the Andalusia Technology Park’s honour book: “I would like express my gratitude to this city, where I have spent the most important years of my life”.

So as to further understand Severo Ochoa’s stay here in Málaga it is essential that we read the article by Victor Heredia Flores (2003), “Severo Ochoa en Málaga: La década mediterránea de un Premio Nobel” [in English: Severo Ochoa in Málaga: the Mediterranean decade of a Nobel Prize Winner] in the magazine Jábega 93. 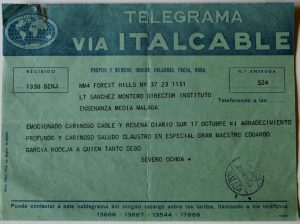