The interior of the old chapel

If you ever notice the estrange tower that puts in strain La Rosaleda stadium’s architecture, tell your companion it’s an exceptional example of the Spanish architecture of the 20th century. This wonderful photo taken by Luis Benzo was the poster of the group Aula 7’s extraordinary exhibition for the Nuestra Señora de la Victoria High School’s 50th anniversary. The building was designed by Miguel Fisac Serna (1913-2006), an important architect in Spanish architecture history. He wanted his works, which always fitted perfectly the scenery where they were built in, to be innovative at the same time as inhabitable and aesthetic. Although the multiple extensions have undermined the original project, its originality is still clear. We will mention him again on other posts because of his cutting-edge design, his presence on art history encyclopaedias, his prestigious publications about architecture and its restoration.

His characteristic style is showed in the great architectonic space of the High School that was once the Chapel and now is the Main Hall. According to the newspaper SUR, the authorities stopped and stared at the «Main Hall/Chapel, a master piece by Miguel Fisac that develops his theory of the dynamic wall as a mean of spiritual rising towards God».

The Chapel is an example of dynamic space, indeed, the first one created by Fisac. He broke the traditional concept of the temple by creating an asymmetry specially in the extension of the right wall that surrounds the back of the altar and finishes with a large bay that provides great luminosity. 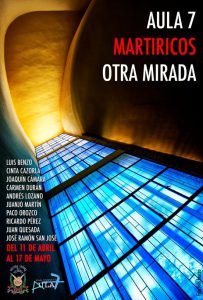