The history of thousands of students is documented in our archives. We even have documents prior to the high school’s founding in 1846 since it incorporated the archives of the Real Colegio de San Telmo from the 18th century. In the archives, we preserve some records of children who ended up making history in universal culture and science. On this occasion, we present Vicente Aleixandre’s admission exam. He won the Nobel Prize in Literature in 1977. The exam was hard to pass, and it usually contained a little dictation of an extract of Don Quixoje and one arithmetic operation. It’s dated on the 1st June 1908. The following year he moved to Madrid where he finished his Bachillerato studies.

What comes next are some of the words that he dedicated to Málaga, the City of Paradise in one of his poems:

“I have lived in Málaga nearly all my life. My father was a railway engineer, and I was born in Seville because my father worked there. Then he was sent to Málaga, where there the headquarters were. It had a beautiful name, the ‘Compañía de los Ferrocarriles Andaluces’ [Andalusian Railways Company in English]. It was a very large and ramshackle building, and the Malageneans, who name and baptise things upon seeing them, used to call that huge ramshackle headquarters ‘El Palacio de la Tinta’ (the Ink Palace in English).

My parents, my sister and I lived in Málaga until 1909. I got time to enjoy life, to learn to read, to go to school… I still remember the name of the school’s headmaster, don Buanaventura Barranco Bosch. He had a fierce moustache, like a kaiser, but above it he had kind eyes. It seems like my fate as a poet of a determined generation, which was destinguished for the friendship among its poets, was already coming to life. Because in primary school, I was the schoolmate and then the friend of whom would later be one of my poetry mates: Emilio Prados. I think this was the oldest friendship from the generation. Emilio lived in Calle Larios and I used to go there by myself, scream for him to come down and walk to Calle Granada where the school was. It was a time when Málaga was considered pleasant, Manolo Blasco, Picasso’s cousin, painted the Malaga of the beginning of the 20th century in a very emotional way, and that is the Málaga I lived in. 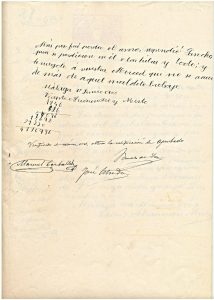